Cultured inspiration for a new year: for some of us that enjoy perusing at Galleria Carla Sozzani, or looking through their photography and art books, we have a new wonder book to collect.  To mark the occasion [of the retrospective], Carla Sozzani Editore has issued a limited edition book highlighting 22 years of the Gallery and the photographers it has introduced from its founding in 1990 until 2012.  Just a few of the now familiars included that have graced the Milan gallery include Man Ray, Lilian Bassman and Horst P. Horst, Sarah Moon, Paolo Roversi, Peter Lindbergh, Helmut Newton, Annie Leibovitz, and Steven Meisel– and the list goes on. –Brigitte Segura

“Starting at the beginning of the gallery’s history when every choice was courageous and the art of photography was little recognized and generally underappreciated… When the Italian art world had a hard time finding the street Corso Como, or how to see and understand these new and interesting trends in photography the Gallery was spearheading in this dark corner of Milan.” 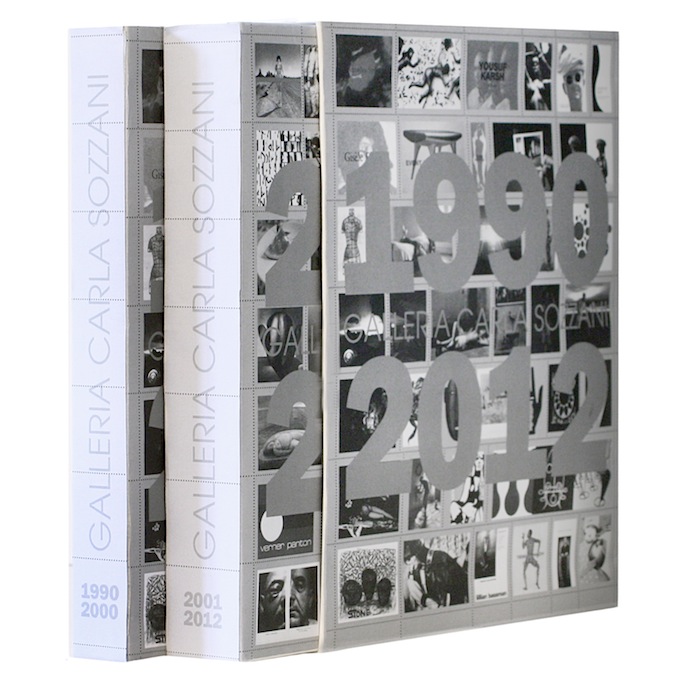 A few bits from Scimé‘s text from the book to energize:

In May of 1990, as the Gallery began to take shape, Kris Ruhs created an installation piece that brought together the rough walls of the former garage and the art gallery now growing in the rubble.  Twenty two years later, one of the latest pieces by Kris Ruhs  sits at the gallery’s heart while photographs around the walls tell of the amazing journey of this space and the people who have been a part of it.  Each year has been carefully curated to reflect the Gallery’s growth.  The first show in September 1990 was Louise Dahl-Wolfe, a woman photographer, who has grown in stature throughout her career; then Carlo Mollino, with his surprising polaroid pictures.

Since then other artists have followed: Man Ray, Lilian Bassman and Horst P. Horst, Sarah Moon, Paolo Roversi, Peter Lindbergh. In 1993 Helmut Newton, one of the most important photographers of the contemporary era, had his first exhibition, as did Annie Leibovitz, Steven Meisel, with more shows to follow.  In 1994 Frantisek Drtikol and his unusual women that “tasted so vintage” drew people to see photography in a new way. The “Small Trades” of Irving Penn, rarely seen, and the iconic photograph of Marilyn Monroe taken by Bert Stern, her last good bye, also graced the walls.

Exhibition after exhibition, the gallery has brought to light many new talents, the stars of today: Julius Shulman, the genius of architecture photography; Ralph Eugene Meatyard who has only recently begun to be recognized by his American compatriots; Anton Bruehl, whose presence deserves more attention; the Japanese photographers, Shoji Ueda and, the other master Eikoh Hosoe, an absolute revelation;  Francesca Woodman, Mario Cravo Neto and Luìs Gonzales Palma. The Gallery introduced Kwong Chi Tseng to Europe, anticipating the growth of the Asian art scene.

Twenty two years of constant attention – caring about every detail of every event – the great love for this medium of photography – has transformed this private passion of Carla Sozzani into a gift for all.

about 10 Corso Como: a  multifunctional philosophy of culture and commerce: a unique blend of art, music, design, cuisine and culture from around the world to the world. Located at Corso Como 10 – 20154 Milano, Italia | more info: 10CorsoComo.com.