Kicking off his resort 2014 collection, Christian Siriano‘s muse went modern. Songstress Estelle and actress Anna Chlumsky were just a few of the starlets that stopped by his NYC abode for the debut.  Influenced by the free flowing brushstrokes of Kristy Gammill, Jenna Snyder-Phillips, and Nicholas Wilton, the style’s of these modern abstracts artists updated the Siriano sensibility, and the pops of color insured the Siriano woman is the center of attention wherever she journeys. 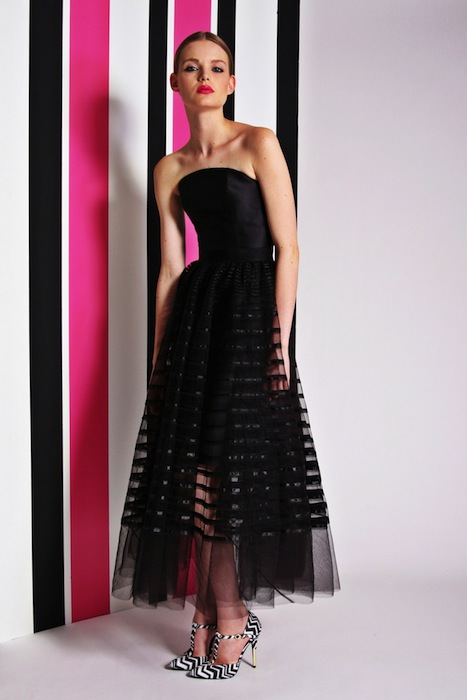 Known for making dinnertime duds DRAMA, Siriano applied a bit of it to daytime. Take the fabrics: as leathers and feathers looked fresh when placed next to the brighter hues. His resort woman is no wallflower, as head to toe yellows and purples were broken up by geometric prints and pleating. An ivory asymmetrical strapless dress hemmed in black perfectly combines sweet and sass. Full shoulders, skirts, and hey, even a peplum or two, transitioned the drama to day that’s usually reserves for black tie attire.

Although, never fear, Siriano didn’t leave his evening gal at the doorstep. The collection’s gowns featured standout shades that were mostly contained as stripes on the bodice or the skirt. More city slicker and less country club, Siriano also offered above the knee cocktail gowns, with soft, sheer overlays. Maintaining the hourglass shapes, Siriano stayed true to his feminine muse. Yet he will also attract some new names with the sharp prints and sexy cuts. Black wasn’t a bore, since it will definitely shine in the moonlight thanks to the hints of shimmer on the fabric. Topped off with some cool shades and a monochromatic shoe, added a sleek touch overall. fdm LOVES selects from Christian Siriano Resort 2014 by Brigitte Segura, written by Mary Anderson.