A dreamy visionary of contemporary couture, Rafael Cennamo combined Ancient Egyptian roots with an avant-gardian essence to create an exceptional Fall/Winter 2013-2014 collection shown at Mercedes-Benz Fashion Week. This collection was one that truly made us feel as we were walking into a mirrored closet in Cleopatra’s tomb. The antiqued Egyptian influence oozed off of the gold-dipped ensembles ever so eloquently. 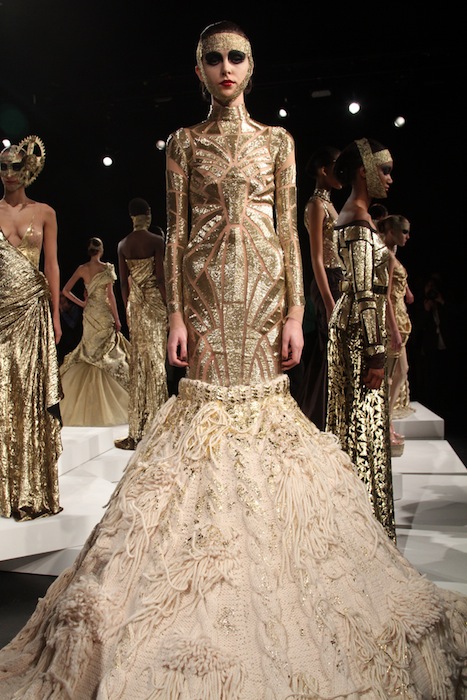 Thousands of minuscule embellishments nestled in the grooves and creases of these intricate gowns. The fabrics heavily cascaded from the sheltered bodices with an out of this world contemporary elegance. The textural play was skillfully ornate; every arc and curlicue was presented as delicately and apprehensively as Cleopatra’s ensembles would have been. This fit-for-a-queen collection not only showed excellent craftsmanship and attention to detail, it really captivated the culturally rich Egyptian aestheticism, through the geometric etching and figuration of every ensemble.  To get the real vibe of the show, listen to the show music here, by Nima Yamini

One particular faux-turtleneck gown captivated this majestic essence with a figure-constricting, gold, geometric pattern, which created the illusion that these shapes were actually embellished onto the human body… the fabric contracted downward in a trumpet-like manner and was adorned with braided and embroidered details. Many of these looks instituted a facade though shadowing of the metallic fibers and glimmering appliqués. There was a lot of creative perspective that helped develop this astonishing collection, and it couldn’t be more in tune with the aristocratic motif designer Rafael Cennamo has established for the season. fdmLOVES selects from RAFAEL CENNAMO by Brigitte Segura, Written by Julia Paulescu.