Oscar de la Renta is still the emperor of embellishment for Resort 2014. Though some of the looks were less dramatic, the added ornamentation is welcome, because let’s face it- ladies who lunch also seem to love it. In this collection venturing away from the body was a bold decision for the designer, and one that worked well for the 21st Century girly-girl. 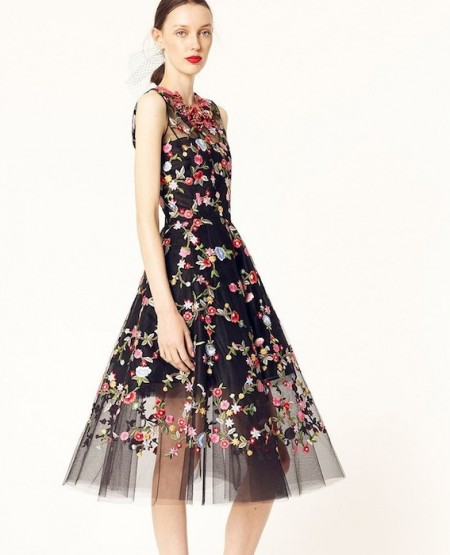 Shocking citrons even extended into evening wear, but the designer kept it chic with the feminine cuts, with a few pops of pink. Going graphic into evening wear meant mixing florals with defined lines, while highlighting new ways to meld the two designs together. A silk faille dress in blue was the hot ticket, as its intricate designs will be much-loved by the labels loyal veterans, while the younger set will get the chance to show a little leg.

For flirty looks Oscar stepped away from the hourglass for a minute giving us a bit of peplum, bubble-shaped gowns, and even a Watteau back dress.  The trouser variety, which hit at the ankles, proudly showcased bold footwear such as caged booties, graphic sling-backs, and floral stilettos. Receiving the 2013 CFDA Founder’s Award in Honor of Eleanor Lambert, the living legend crafted looks that centered on quality, not quantity, however we think it’s safe to say that in terms of luxury – more is better. fdmLOVES commentary and selects from Oscar de la Renta Resort 2014 by Brigitte Segura,  written Mary Anderson.