The Heart Truth believes that every woman’s story should be “red”, and just in time for Fashion Week and national favorite holiday, Valentines Day, The Heart Truth’s 2013 Red Dress Campaign was brought to life, right here at the heart of New York City. The 2013 Red Dress Campaign is a national movement created for the women of America in order to raise awareness and help improve the heart health of millions of women nationwide.

The warm enthusiasm of the show was set at an all-time high when the Jenners, i.e. Kris Jenner, Kylie, and Kendall, stepped out their Badgley Mishka gowns to support a cause indenting to their hearts as well as the hearts of millions. A multitude of celebrities with equal passion for the cause also stepped out to support the The Heart Truth’s 2013 Red Dress Campaign, by showcasing the very dresses that symbolize the importance of heart-health, love and awareness to women across the nation. The 2013 Red Dress Campaign, sponsored by the National Heart, Lung, and Blood Institute at the National Institutes of Health, unveiled their remarkable collection of red gowns at the romantic Hammerstein Ballroom in New York City on Wednesday, February 6, 2013. The dresses were created as a significant reminder of the importance of heart health, and the valuable role we play as individuals in fighting heart disease. 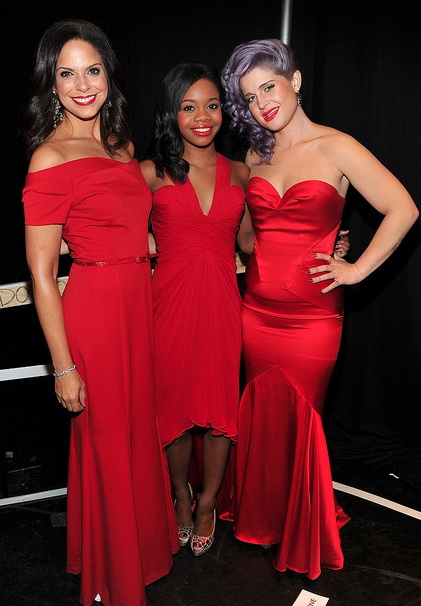 This moving collection was created by some of America’s most esteemed fashion designers and were modeled by 20 inspirational celebrities, which proudly came out to honor and represent The Heart Truth’s 2013 Red Dress Campaign. The featured designers of the gowns included: Adrianna Papell, Badgley Mischka, Black Halo Eve, Carmen Marc Valvo, Carlos Miele, Carolina Herrera, Cushnie et Ochs, David Meister, Herve L. Leroux, Marc Bouwer, Nicole Miller, Norma Kamali, Oscar de la Renta, Pamella Roland, Reem Acra, Tadashi Shoji, and Zac Posen. The 20 passionate advocates that presented the dresses down the runway were celebrities : Brenda Strong, Chiqui Delgado, Cindy Parsons, Fran Drescher, Gabby Douglas, Jamie Chung, Jillian Michaels, Kelly Osbourne, Kendall Jenner, Kris Jenner, Kylie Jenner, Minka Kelly, Nastia Liukin, Roselyn Sánchez, Savannah Guthrie, Soledad O’Brien, Toni Braxton, Torah Bright, and Wendy Williams. Not only did the women step out to speak against heart health, they incorporated a personal note, in which they dedicated their walk down the runway to something near and dear to their hearts. The gowns were paired with possibly the best suiting stilettos that exemplify the power that the color red has, Christian Louboutins. Each gown was paired up with none other than the famous red-bottomed stilettos to create an emphasis behind the symbolic dress, all in effort to fight heart disease. The stars’ radiant smiles and personalities came together to illuminate the ballroom causing the positive vibes that were bustling amongst every audience member.

The The 2013 Red Dress Collection, serves as an inspirational reminder to women everywhere that we all play an important role in fighting the chronic disease that negatively impacts not only ourselves, but our loved ones: heart disease. The Heart Truth was able to create the Red Dress Collection courtesy of a collaboration between NHLBI and the American College of Cardiology. The presentation of The Red Dress Collection 2013 Fashion Show was attributed to a dual-partnership between Diet Coke and WebMD, all done in effort to raise awareness of heart disease and what you could do to keep you heart safe.  Written by Julia Paulesco.