Attendees at Emerson Fall 2013 enjoyed a bit of gabbing while passing the time pre-show, which suited us just fine. Peoples Revolution‘s Kelly Cutrone asked us (on the speaker) if the show could be delayed to accommodate the arrival of designer Jackie Fraser-Swan’s hubby and kids en route from their hometown of Boston, due to travel challenges with the winter storm- and who could say no to the family.  News circulated that singer Natasha Bedingfield wore an Emerson gown to the Grammys on the same eve of the show, it had the crowd revved with anticipation, and gave us just one more thing to talk about. 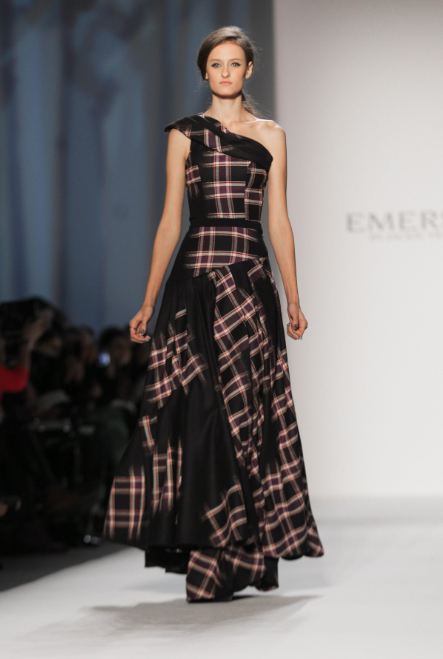 Done-up grunge chic was pretty and modern with a touch of tough. Leather and plaid left an distinct impression while sheers teetered between romance and rock.  School girl smocks get grown up with slim lined silhouettes like pencil skirts and turtlenecks making for a sophisticated rebel. Basics were detailed but remained understated while more obvious elements like asymmetric shoulders conjured an alternative to plain Jane.

The overall styling brought the Emerson girl to life on the runway. Hair by Zahir Ziani for Elixabeth Arden Red Door Spa and in compliment to the Cleopatra cat-eyes by make-up artist Kai Vinson for Bobbie Brown Cosmetics create. The shoes were provided by Carlo Pazolini and Jewelry by Ana Sheffield. By the time all was said and done, most would say it was worth the wait, and we concur. Emerson FW13 NYFW Written by Sarah A. Freiseis.