A soirée-like scene unfolded at the penthouse presentation at the St. Regis Hotel. Models posed on platforms under a cloudscape painted ceiling accented by glorious chandeliers. In a departure from Lincoln Center runway shows, DENNIS BASSO left behind the backstage sanctuary for spring 2013 and stepped out into the crowd and made himself available to personally discuss components of the collection with celebs, socialites, and smartly, the all-powerful media. Fellow New York based designer Tommy Hilfiger, luxe lady Susan Lucci, and Star Jones were shoulder to shoulder with other attendees as we all flitted about trying to sneak a peek at the twenty-four lovely ensembles on display. 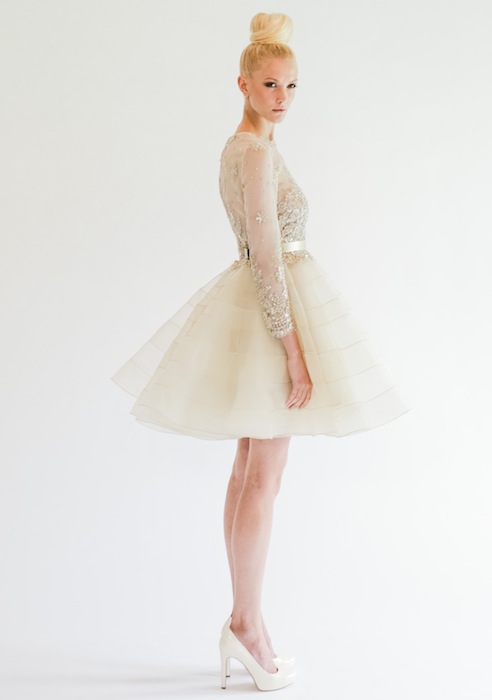 During an on-site interview, FDM editor, Brigitte Segura, said she noticed a freshness, almost youngness instilled in the collection, prompting her to ask Basso where his ‘girl’ was going? and WHAT was the BASSO swish about this season…

He happily confirmed the observation, and said ‘she’ would be wanting to make an entrance wherever she may be, from a friend’s wedding to supporting a cause at a charity event. Intrigued by the sass that accompanied the style she asked, “What are you calling the ‘Basso Swish’ this season?” he responded with an enthusiastic, almost giddy chuckle at the moniker before answering earnestly. “A lot of action, a lot of movement, I love movement, I think clothes should move. I think it gives a certain sexuality, stylishness, and a little bit of flair,” he said. Segura and Basso shared a few moments eyeing the garments, discussing design specific elements and gushing over the use of a most lovely presence of blue from richly bright to a lighter slightly purpled nearly periwinkle shade. 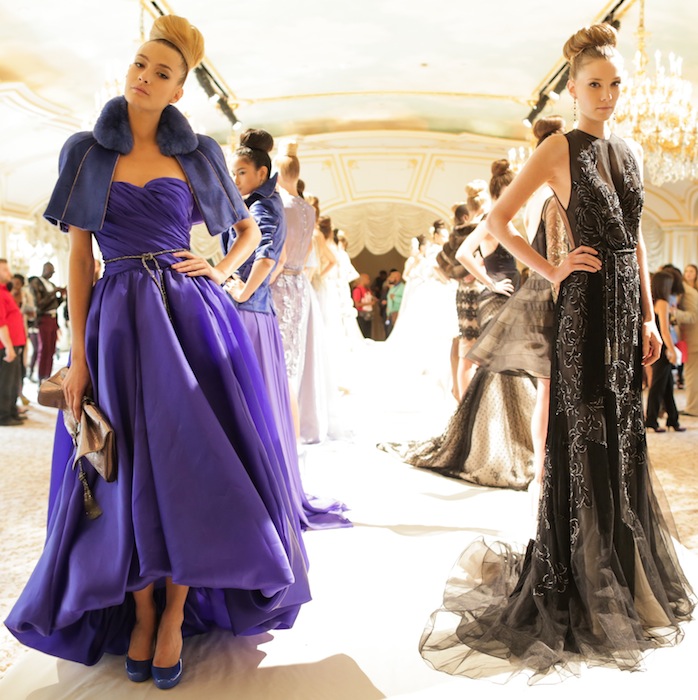 This season focused on the fabulous life, one filled with one function after another, a statement making ball gown required for each. Soft greys and nudes were polished drama in the finished form, with black as evening’s tried and true. From slender columns with ornamentation to full skirted gowns, the couture style attention to detailing made the difference with captivating placed silky fringes, bookoos of glittery beadwork, and foil metallics combining foundations of glamour for panache. The dresses were meant to be worn with a poised passion. Appropriately, the John Barrett Salon at Bergdorf Goodman was behind the elegant up do’s, and interestingly, shoes of Basso’s own design were created in collaboration with Pour la Victoire in shades of blue and ivory.  Dennis Basso spring 2013 NYFW Interview by Editor-in-Chief Brigitte Segura, Written by Sarah A. Freiseis.