Just released! Madonna’s latest video of Ghosttown is a pop ballad placed in a (post apocalyptic) setting where the survivors only hope is their ability to hold on to love. Madonna looks stunning in A.F. VANDEVORST‘s emerald green silk satin gown throughout the entire video, providing the only splash of color among the grays and maroons of a city laying in ruins. 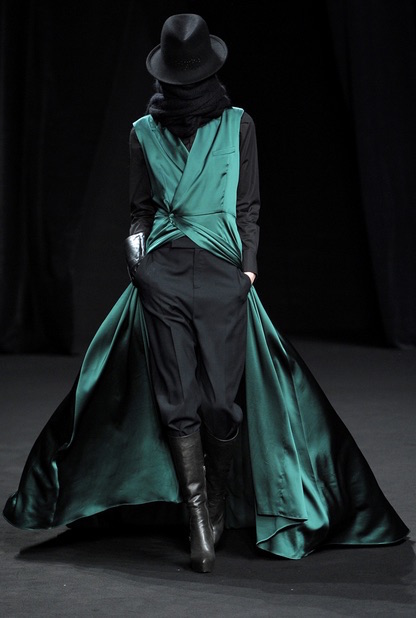 The “Dingo” dress is named after Joseph Beuys’ coyote from the 1974 performance piece in which the artist spent 3 days sharing a room with the wild animal, a testament to human and animal behavior as well as time, almost mirroring Ghosttown’s narrative.

about A.F. Vandervorst:
For 16 years, Belgian designers An Vandevorst and Filip Arickx have established an internationally renowned fashion house, with pieces recognizable by the red cross stitched into the back of each garment. Understanding their work as a medium to express their creativity and a certain lifestyle that shares a relatable story, A.F.VANDEVORST stands for much more than just clothes, and is finding its completion when worn by a woman who finds her femininity through strength in her stance, not unlike the queen of pop, and all truly empowered women who are proving strength, through their acts and sometimes also through their clothes.

The music video for Ghosttown, Madonna’s latest single off her album Rebel Heart, was released on April 8, 2015, directed by Jonas Akerlund, and styled by costume designer and stylist B. Akerlund, another husband and wife team, both known for pushing the boundaries Jonas, with his distinct storytelling and visually driven style and B. for her daring looks.

Related articles across the web